Sicilian Dough Without a Starter

Recipe from The Pizza Bible by Tony Gemignani.

How to Make Sicilian Pizza Dough

For Parbaking the Dough

Put the yeast in a small bowl, add the warm water, and whisk vigorously for 30 seconds. The yeast should dissolve in the water and the mixture should foam. If it doesn’t and the yeast granules float, the yeast is “dead” and should be discarded. Begin again with a fresh amount of yeast and water.

Combine the flour and malt in the bowl of a stand mixer fitted with the dough hook.

With the mixer running on the lowest speed, pour in most of the ice water, reserving about 2 tablespoons, followed by the yeast-water mixture. Pour the reserved water into the yeast bowl, swirl it around to dislodge any bits of yeast stuckto the bowl, and add to the mixer.

Continue to mix the dough at the lowest speed for about 1 minute, until most of the dough comes together around the hook. Stop the mixer.

Use your fingers to pull away any dough clinging to the hook, and scrape the sides and bottom of the bowl with a bowl scraper or rubber spatula.

Add the salt and mix on the lowest speed for 1 minute to combine.

Coat a half sheet pan with a film of olive oil. Using the bowl scraper, scrape the dough onto the prepared pan. The dough will be extremely sticky—too sticky to knead .

Working with wet hands, stretch and fold the dough (see Stretch-and-Fold Method below).

Cover the pan with a damp dish towel or plastic wrap and let the dough rest at room temperature for 1 hour.

Using a dough cutter, lift the dough into a large bowl, press it down slightly, and rub a little water over the top. Cover with a double layer of plastic wrap and put in the refrigerator for 24 hours.

Remove the dough from the refrigerator and put it in the bowl of a stand mixer fitted with the dough hook. Mix the dough for 30 seconds on the lowest speed to degas the dough, removing any air bubbles.

Lightly oil a half sheet pan. Move the dough to the scale, weigh the dough, and adjust the quantity of dough as necessary for the recipe. You may have a little extra dough.

Form the dough into a ball or balls and return the ball(s) to the oiled sheet pan (spacing them 3 inches apart if you have made 2 balls).

Wrap the pan airtight with a double layer of plastic wrap, sealing the wrap well under the pan. Put the pan in a level spot in the refrigerator and refrigerate for 24 hours. 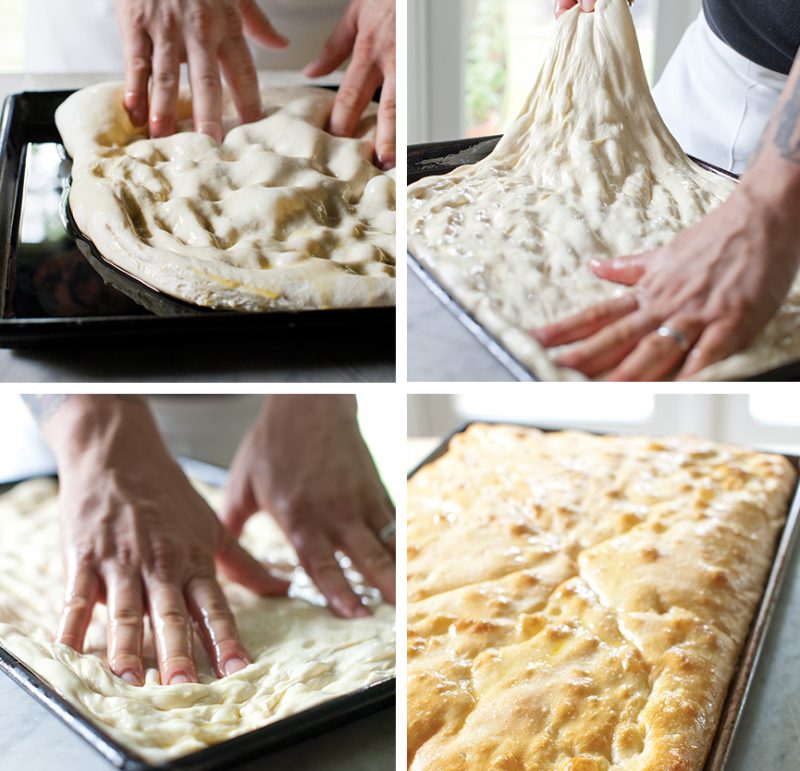 Remove the dough ball from the refrigerator and leave wrapped at room temperature until the dough warms to 50°F to 55°F. This should take 1 to 2 hours.

Pour the oil into the center of a well-seasoned 12 by 18-inch steel Sicilian pan.

The dough is very sticky, so the easiest way to remove it from the sheet pan is to hold the sheet pan upside down over the Sicilian pan and use a bowl scraper to release the dough, letting it fall into the pan. Using the bowl scraper, flip the dough over to coat both sides with the oil.

Using flat, fully extended fingers of both hands, press the dough outward in all directions, extending it toward the corners to make an even layer. The dough may be stretched toward the corners. If you work gently, the dough should stretch without tearing. Don’t worry if the dough doesn’t reach the corners. Set, uncovered, in a warm spot and let rest for 30 minutes.

After resting, the dough is ready to push outward a second time. It will not be degassed, so use a light touch to push the dough, rather than pulling it, repositioning it in the pan as needed to achieve an even thickness and to reach to the corners.

Let the dough rest again (still uncovered) for 1  1/2 to 2 hours, until it has risen almost to the rim of the pan. The timing will depend on the temperature of the room. At this point, do not touch or press on the dough again, even if it has pulled away from the edges, or it may not rise properly.

Meanwhile, set up the oven with two pizza stones or baking steels and preheat to 450°F for 1 hour.

While the dough is rising, prepare the toppings for the pizza as directed in each recipe.

Keeping the pan level, gently set it on the top stone and bake for 7 minutes. Rotate the pan 180 degrees and transfer it to the bottom stone. Bake for another 7 minutes, until the top of the crust is a rich golden brown.

Remove the pan from the oven and use a wide metal spatula to lift a side of the crust to see if it is sticking to the pan. If it is, drizzle a little oil around the sides of the pan to help loosen it. Now run the spatula around the edges and under the entire crust to be sure it isn’t sticking and has completely released from the pan.

Take the crust out of the pan and let rest on a cooling rack for at least 30 minutes or up to 2 hours (for longer storage, see note).

It is not necessary to wash the pan or add more oil to it. But if any bits of dough are stuck to the pan, remove them.

When ready to finish the pizza, if you have turned off the oven, preheat it to 450°F for 1 hour. Return the parbaked crust to the pan before topping and baking.

Note on Longer Storage of Parbaked Sicilian Dough: The parbaked crust can be held for up to 10 hours. To keep it moist, wrap it in a large plastic bag and tie securely. Clean and reoil the pan before baking.