A Worthy Alternative to the Traditional Bird

If you don’t want to roast a whole turkey, or you’re just looking for a new tradition, try this boneless stuffed turkey breast. The butchery is easier than you think, but you can always have the butcher do it for you! The chestnuts and the liver in the stuffing add a great nutty flavor that pairs well with the turkey breast without overpowering the meat. 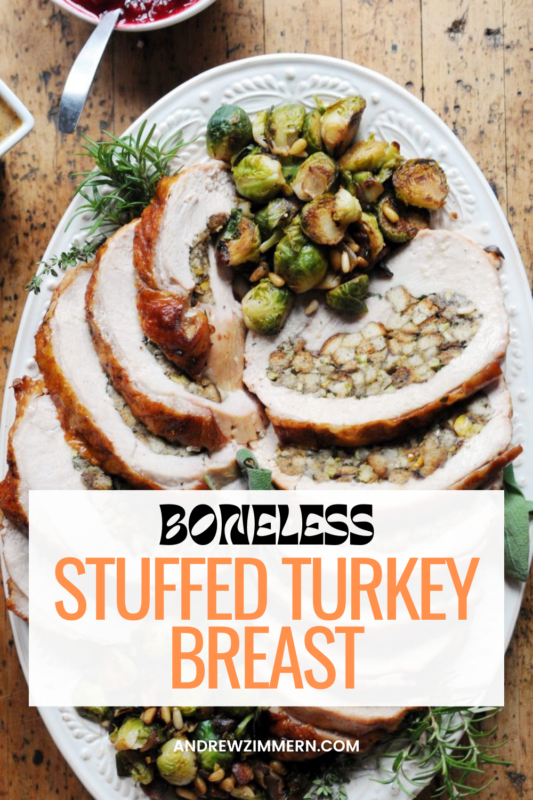 Preheat the oven to 350 degrees.

Make an incision about 1/8-inch deep through each chestnut shell, just into the flesh of the nut, and work your way almost around its circumference. After slitting the shells, transfer the chestnuts to a rimmed baking pan, and roast them in a 350-degree oven for about 35 minutes. While the chestnuts are hot, remove and discard each shell and the papery skin. Chop the chestnuts.

Mince the celery, onion and parsley. Set aside.

Season with the thyme, sage, salt and pepper.

Place stuffing on the breast and fold the edges of the turkey “envelope” over the stuffing. You should have a “football” of turkey.

Flip to skin side up. Roll and tie turkey with butcher’s string.

Rub the turkey with butter and sprinkle with paprika and sea salt.

Place the turkey on a rack fitted into a large pan.

Raise temperature to 400 degrees and continue roasting until internal temperature of the meat is 160 degrees. Keep an eye on your roast, this may not take as long as you think.

Let rest for 10 minutes, slice and serve with the gravy.