Topped with leftover slices of brisket, these potato pancakes will blow your mind. For me, making latkes has always been a family activity. I first made these with my grandmother when I was 4 years old. I had my son squeezing potatoes for me when he was 3. Cooking is a cultural totem that brings people together to share love and joy in a very unique way. 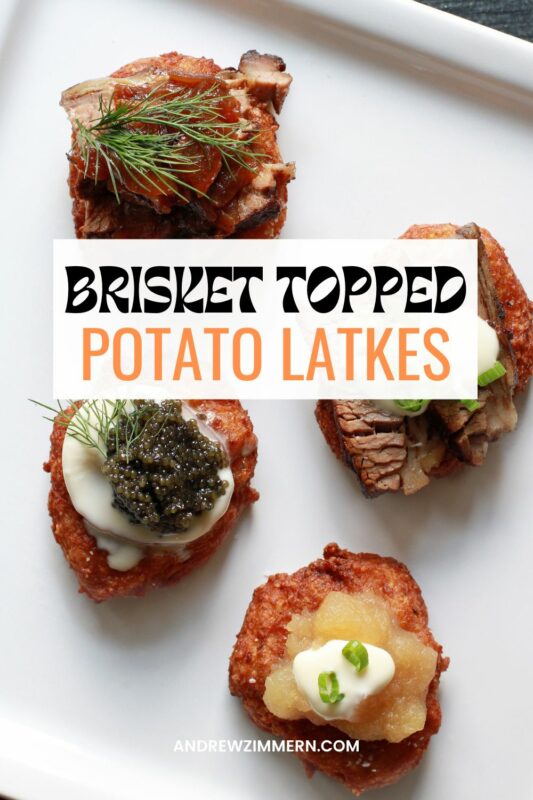 In a medium saucepan, cover the Yukon Gold potatoes with cool water, season generously with salt and bring to a boil. Cook the potatoes until tender, about 15 minutes. Drain well and immediately pass the potatoes through a ricer into a large bowl.

Working quickly, peel and grate the baking potatoes on the small holes of a box grater into a medium bowl. Pour out excess brownish water, leaving the grated potato and white potato starch in the bowl.

Add half of the grated potatoes to the bowl of a food processor. Add the onion and pulse until the potatoes and onions are very finely chopped, almost pureed. In a large mixing bowl, combine that mixture with the remaining grated potatoes and the riced potatoes. Stir in the matzo meal, eggs, white pepper and 2 teaspoons of salt.

In a large, heavy skillet, heat 1/4 inch of oil until shimmering. Working in batches, form the potato mixture into patties and place in the oil. Fry over moderate heat, turning once, until the latkes are golden and crisp on both sides, about 7 minutes. Drain the latkes on a paper towel-lined plate and sprinkle lightly with salt.