We made Pat LaFrieda’s Original Blend Burger & loved it.

While I have no complaints about good quality pre-ground beef, I’ve always wondered if grinding my own meat for burgers would result in a superior flavor that warrants the extra effort. Well, thankfully my job requires that I put such experiments into action and that we have master butcher Pat LaFrieda in the rolodex. After a 30 minute call to LaFrieda Meats in New Jersey, I got every detail I needed, from the best cuts of beef to buy to Pat’s favorite burger toppings. So I finally took that meat grinding attachment I got for Christmas last year out of the box, and got to work. Here’s what I learned.

First, source the best beef on the market.

According to LaFrieda, the most delicious animals are 100 percent Black Angus cows that are less than 24 months old. When you source the beef from a trusted butcher selling responsibly-raised meat, it’s a no brainer your burgers will taste better and be better for you than a commodity blend from a commercial feedlot with inhumane conditions for animals and a laundry list of environmental hazards.

LaFrieda’s Original Blend burger has tons of flavor, which is a mix of chuck, clod, brisket and short rib in even proportions of how they are in the animal. In the average cow, there’s 40 pounds of chuck, 20 pounds of clod, 10 pounds of brisket and 5 pounds short rib. 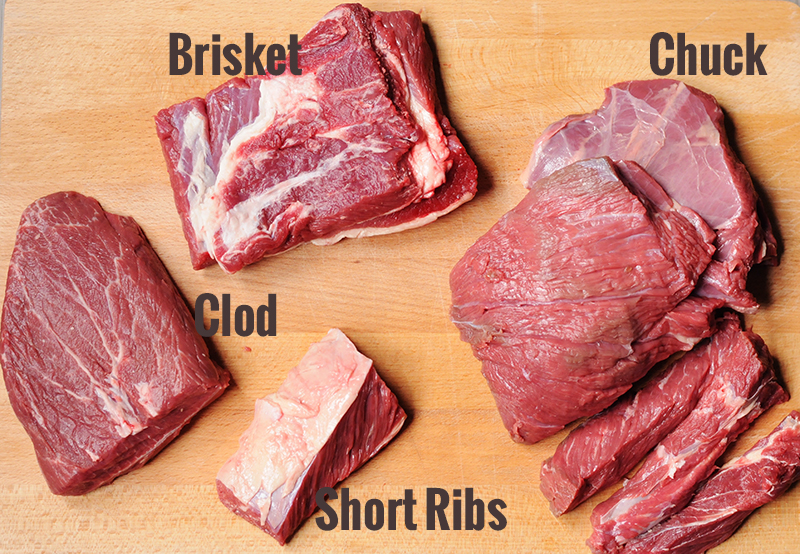 Do not put the grinding machine or the parts in the freezer. Really it does nothing except make the metal more brittle over time. Instead, LaFrieda prefers to chill the meat. Cut each all the beef into strips (small enough to fit into the grinding attachment easily) and lay them out on a baking sheet. Put that in the freezer for a few minutes until the strips are stiff, but not frozen. 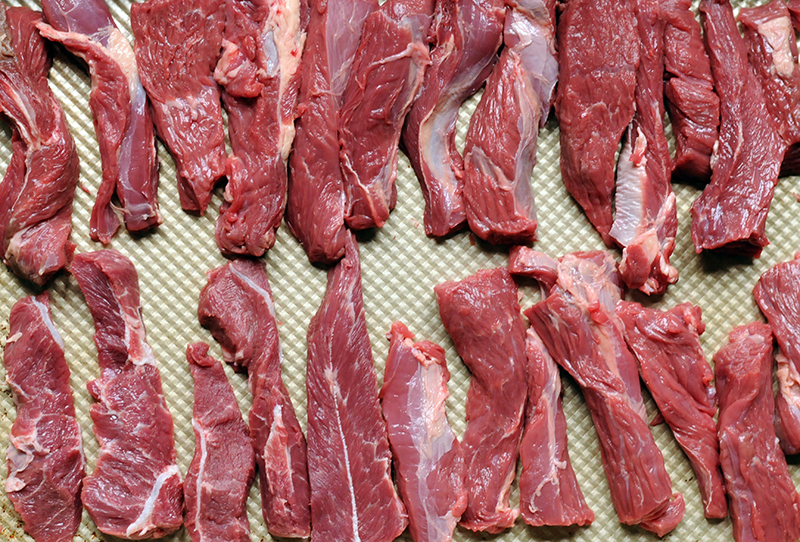 Next, feed the strips into the machine, you’ll see they will come out much faster when they are cold. Any time the machine slows down, the meat is getting over ground. It may be clogged, (which is common, don’t worry) so stop the machine, open up the head and make sure there’s nothing blocking it. 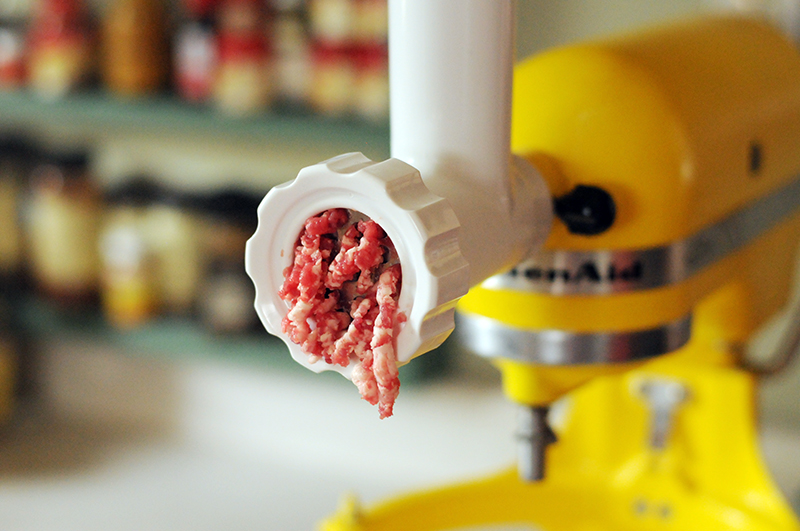 Most machines come with two grind sizes. Grind the meat first using the disk with the larger size holes. Once it comes out of the initial grind, hand mix it. You want to make sure all of the cuts are dispersed equally. 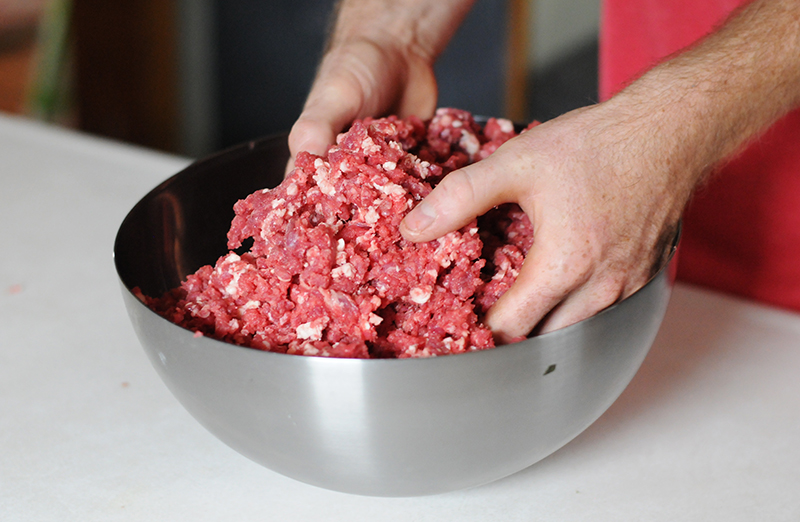 Put the smaller hole plate on for the second grind, and feed the ground meat through. Remember, if the meat isn’t coming out in a steady fashion, make sure there’s nothing blocking it. It’ll be very pasty if it comes out too slowly. You want to see the particle separation of the meat and fat. If it’s homogeneous pink color, then it’s over ground. 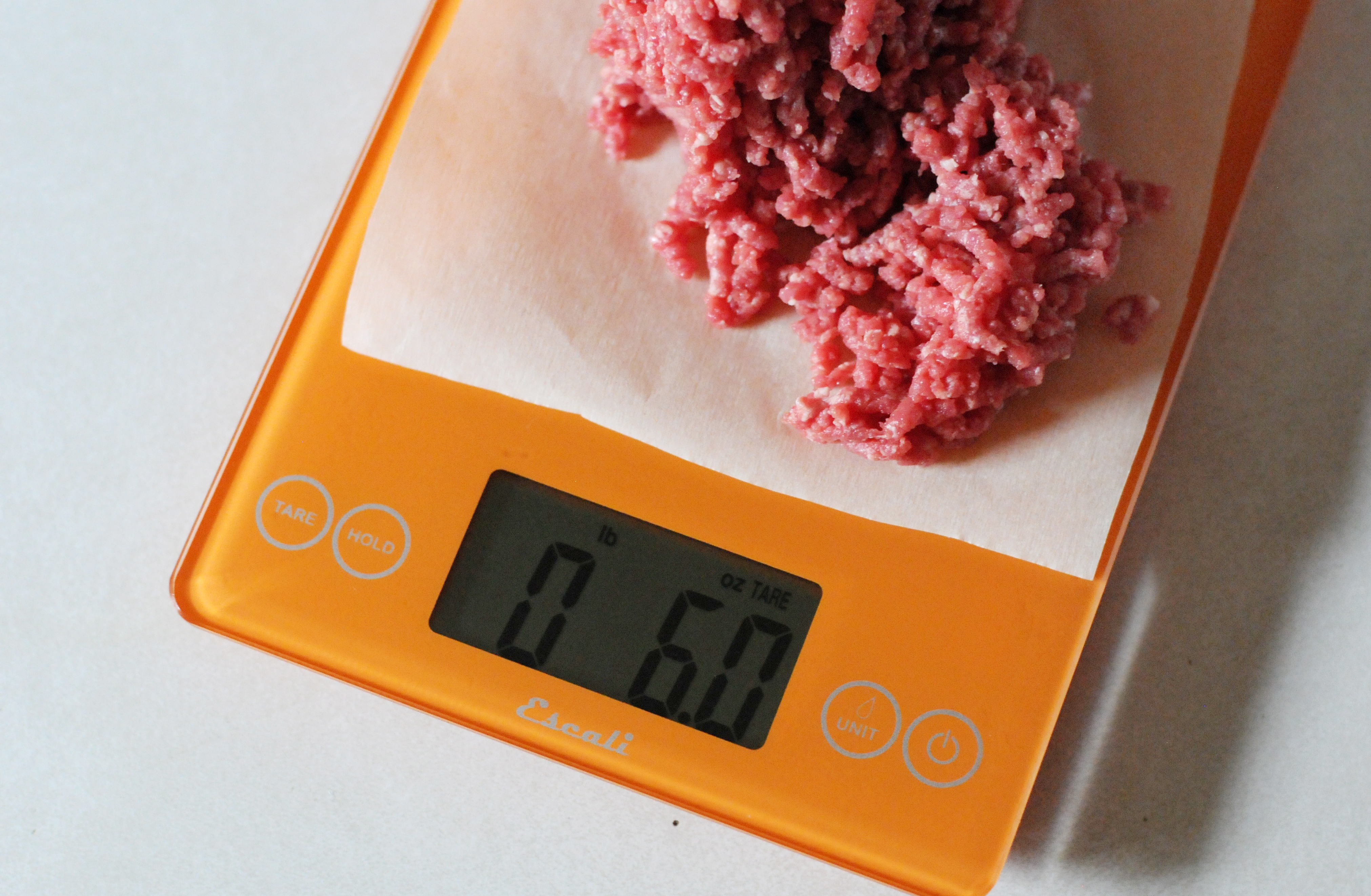 According to LaFrieda, a kitchen scale is crucial for making a batch of burgers. If you want a six ounce patty, measure it out first then form your patty. There’s nothing worse than a grill topped with burgers of all sizes because nothing will cook evenly. For the best resulting texture, try forming a loose burger, touching the meat as little as possible. 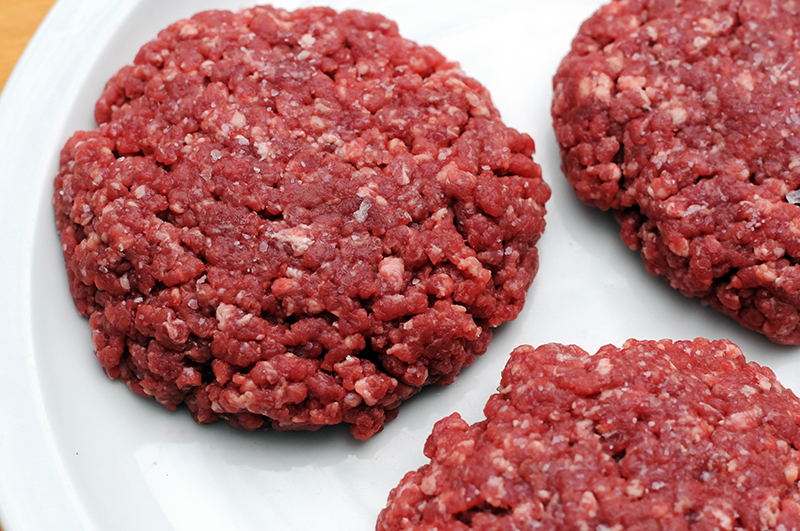 Salt the patties right before they go on the grill, and season with freshly ground black pepper when they come off the grill. If you have enough heat to sear the burgers, then it tends to make the pepper a little bitter. Grill over high direct heat for 3 to 4 minutes per side for medium rare (or if you’re like Andrew and prefer the griddle, try this method). 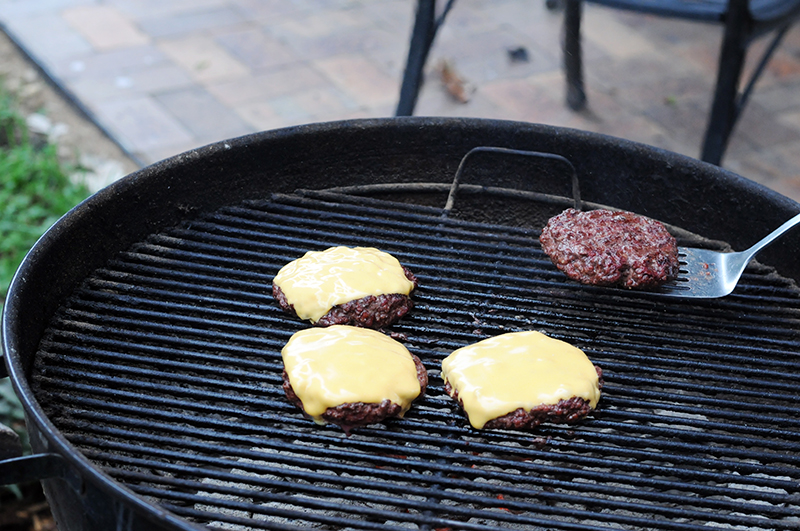 Think Pat LaFrieda is a purist? Nah, he eats too many burgers to keep it simple all the time. His go-to toppings include grape tomatoes, because they’re pungent year around, baby arugula for its nice flavor, and of course, American cheese because that’s what makes it comfort food. 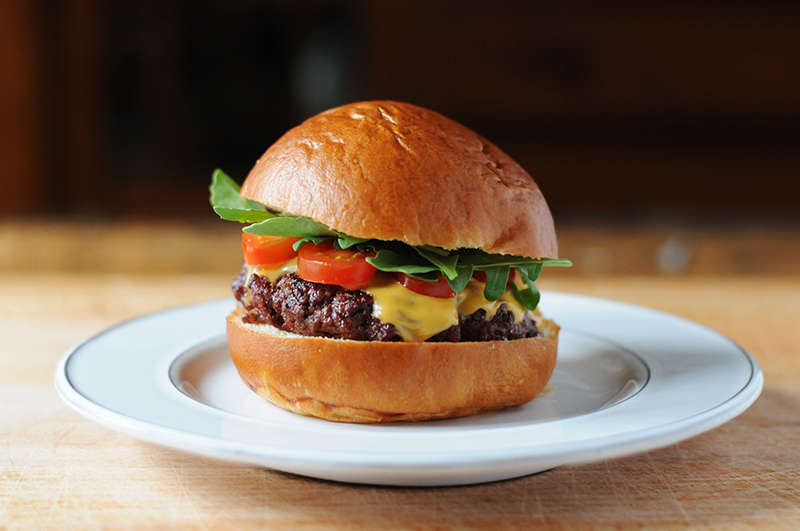 Would I make it again? Absolutely. The burgers were pure, unadulterated beefy goodness. And it wasn’t just the flavor that impressed, the texture was far and away superior to anything you can buy at the store. Although I probably wouldn’t spend the afternoon grinding beef for an average weeknight meal, the next time I throw a summer party and want to pull out all the stops, these burgers will be on the menu.