I wanted to include a dumpling recipe in this book because dumplings are a versatile, easy comfort-food dish to make year-round. I did a lot of research, testing dozens of traditional dumpling recipes, but none of them were quite right. Eventually I settled on this simple potato version, which is a creative and somewhat unexpected way to serve potatoes.

This is similar to what you’d find in a dish like chicken and dumplings, but less floury and more potato-forward. These dumplings would also be wonderful with a light tomato sauce and some Parmigiano-Reggiano cheese, or with a little brown butter and fried sage alongside roast pork.

This is a sensitive recipe, so it’s important to use a kitchen scale to measure out 24 ounces of riced potatoes. If you use too much potato, the mixture might not bind properly and the dumplings may fall apart; if you use too little potato, the dumplings will be too heavy with flour and egg. It’s wise to buy a few extra potatoes just in case.

You will need a potato ricer, as a potato masher will not yield a fluffy enough result. The dumplings are at their best and lightest when the potatoes are riced a day ahead of time and allowed to dry out on a baking sheet in the refrigerator overnight. But if you’re making this recipe the same day you want to serve it, you can freeze the riced potatoes for 25 minutes to achieve a similar effect.

Recipe from Taste & Technique: Recipes to Elevate Your Home Cooking by Naomi Pomeroy with Jamie Feldmar. Get your copy here. 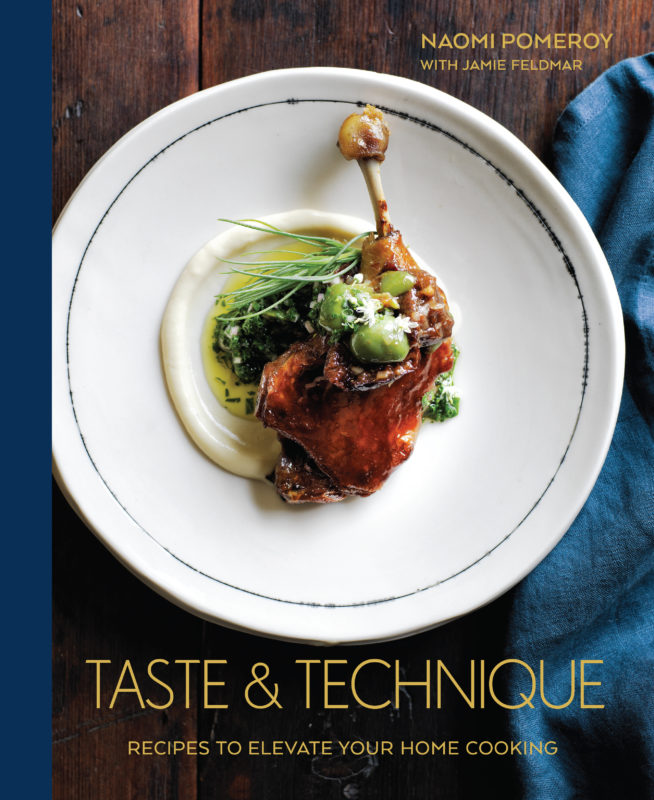 Line a baking sheet with parchment paper and spread the riced potatoes across the pan. Place the pan, uncovered, in the refrigerator overnight to dry out the riced potatoes, or in the freezer to cool for 25 minutes if making the dumplings the same day.

Place the chilled potatoes in a mixing bowl 8 to 10 inches in diameter. Lightly dust the flour mixture across the surface of the potatoes all at once and, using a fork, gently mix to combine (do not overmix). When the mixture looks uniform, add the eggs.

Use the fork to mix until everything once again looks uniform. Then, using both hands, form the mixture into a ball. Very lightly knead it a few times until it forms a homogenous dough.

In a large saucepan, combine the water and the remaining 1/4 cup salt and bring to a boil. Taste the seasoning water and remember how salty it is. As you cook the dumplings, some water will evaporate, leaving the cooking water saltier, so it’s important to add fresh water as needed to bring it back to this level of seasoning. Break off a small piece of the dough and roll it between your fingers to make a dumpling about the size of a Ping-Pong ball. Don’t smash or compact it too much; keep the pressure light and even throughout.

Add the dumpling to the boiling water. When it floats, set your timer for 6 minutes. Allow the dumpling to simmer (not boil) until the timer sounds, then remove it with a slotted spoon or a spider and taste it. The dumpling should be fluffy and well seasoned and not soggy or sticky. It will firm up as it rests. If the dumpling seems too loose and is falling apart, mix another 1 to 2 tablespoons of flour into the potato mixture.

If the tester dumpling turns out well, shape about 12 more dumplings the size of Ping- Pong balls and add them all at once to the water. When the dumplings float, set the timer for 6 minutes, and then leave them to cook, turning them occasionally as they expand. Make sure the water isn’t at a hard boil or the dumplings may break apart.

Transfer the dumplings to a Dutch oven. Replenish the boiling water with additional fresh water and adjust the salt as needed. Using the remaining dough, shape and cook a second batch of dumplings. You should have about 25 dumplings total.

Preheat the oven to 400°F. Add the butter, parsley, and chives to the dumplings and mix gently to distribute evenly. Cover and heat in the oven for 7 to 10 minutes, until warmed through. Serve immediately.